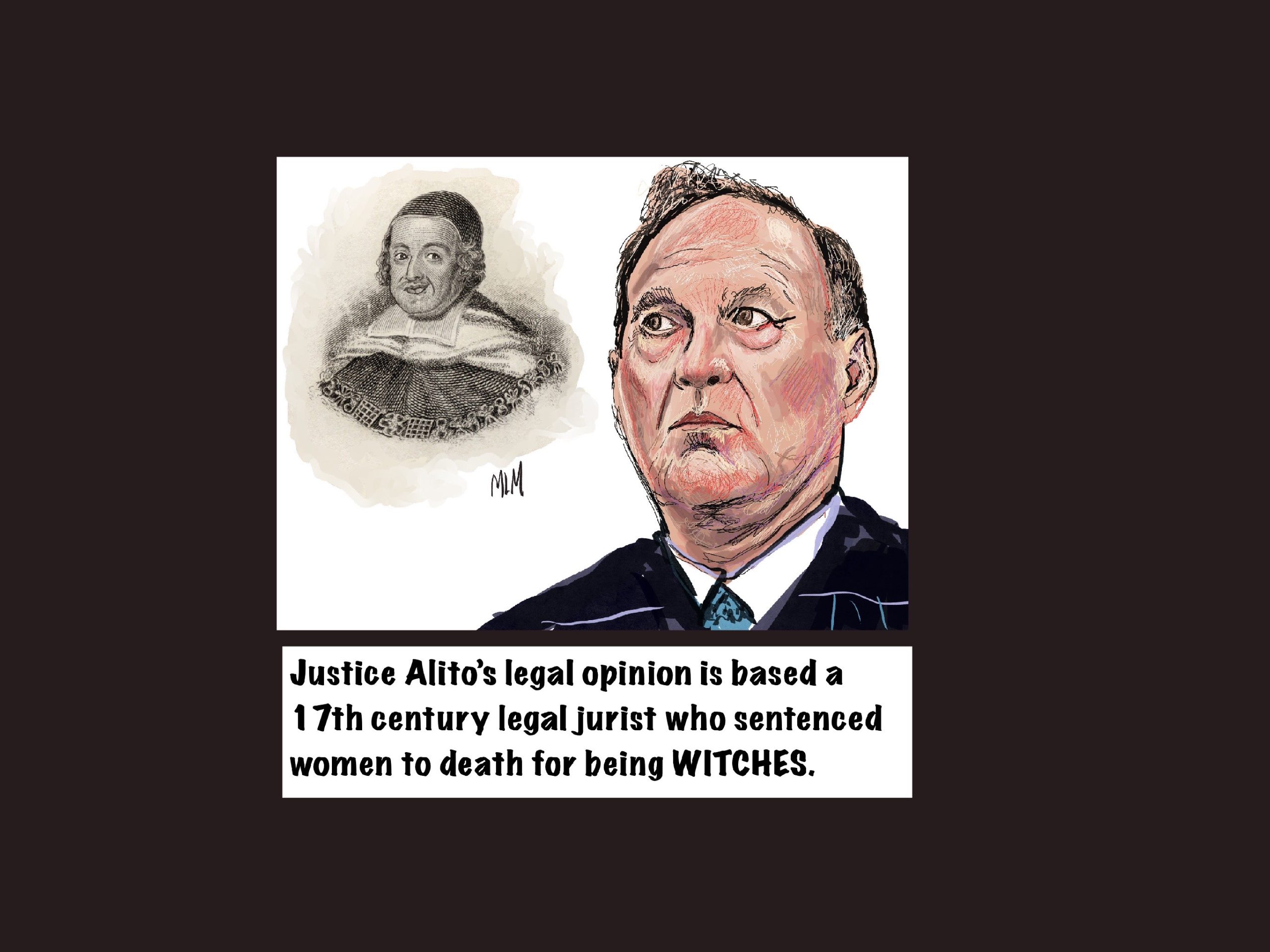 Son titre (Justice Alito is living up to promises to supporters of his nomination) est sans équivoque.

In his first public speech since writing the opinion that overturned Roe v. Wade and eliminated the constitutional right to an abortion, Justice Samuel A. Alito Jr. was angry. Speaking recently at a gilded hall in Rome, Alito ridiculed world leaders who criticized his decision. His sardonic broadsides went viral, with legal observers agape at the spectacle of a sitting Supreme Court justice swiping at Justin Trudeau, Boris Johnson and Emmanuel Macron.

Alito’s headline-grabbing attacks crowded out discussion of another important part of his speech: his comments on religion. He bemoaned America’s “increasingly secular society” and its “turn away from” religion. He quoted scripture and, echoing St. Augustine, said “our hearts are restless until we rest in God.”

Alito also suggested two groups — nonbelievers and people who think religion is “just not all that important” — threaten “religious liberty.” These are fighting words that show a fundamental misunderstanding of the Constitution’s commitment to the separation of church and state. But no one should be surprised. These beliefs pervade the Christian Right, and in fact, Alito’s support for them are a reason he became a Supreme Court justice in the first place.

Alito rose to the Supreme Court thanks to luck, loyalty to the legal right and a game of musical chairs. When Justice Sandra Day O’Connor retired in 2005, President George W. Bush first nominated John G. Roberts Jr. to fill her seat. A few weeks later, he named Roberts to fill a new vacancy created by the death of Chief Justice William Rehnquist, and slotted his White House counsel, Harriet Miers, to fill O’Connor’s seat.

The religious right immediately recoiled at Miers. Some raised concrete objections. She had previously donated to conservative Democrats. Worse, social conservatives saw her answers to an election questionnaire in 1989 as insufficiently opposed to LGBTQ rights. Others fretted that she lacked the verve, ideology and chops to challenge the left — especially when the appointed hour came to overturn Roe v. Wade.

Some of this speculation was baseless; Miers had been a member of Texas Right to Life and led a charge to remove a bar association’s support for abortion rights in the mid-1990s. But Miers didn’t have an extensive paper trail on the issue, and she gave cagey and confusing answers when pressed by Republican senators about whether she believed in a constitutional right to privacy.

The right revolted over her nomination, going so far as to buy television commercials clamoring for a more conservative pick. Their mutiny, along with Miers’s uneven performance as she courted senators, made continuing with the nomination untenable for Bush and forced Miers to withdraw.

But the initial choice unnerved the President’s supporters, who began to question whether Bush was truly committed to using courts to achieve sweeping right-wing social policy.

In a bid to appease them, Bush then nominated Alito, a stalwart conservative whom the right trusted to remake America’s highest court. Alito had spent his life in the trenches of the conservative legal movement. Alito went to law school, in his telling, because he disagreed with Warren Court decisions about the separation of church and state and the rights of criminal defendants and voters. As a federal appellate judge, he consistently ruled against some (prisoners, death row inmates and victims of discrimination seeking redress in courts) and consistently for others (police, corporations and Christians).

Crucially, he passed the right’s anti-Roe litmus test with flying colors. In fact, as a Department of Justice lawyer in the 1980s, he helped craft a legal strategy to undermine the constitutional right to abortion. And as a lower court judge in 1991, he famously wrote a solo-dissent arguing that a state law requiring women to notify their husbands before obtaining an abortion did not unduly burden their privacy rights, a view later rejected by the Supreme Court.

The justice he would ultimately replace, Justice O’Connor, rebuked Alito’s extreme position, noting with two other justices that “a state may not give to a man the kind of dominion over his wife that parents exercise over their children.” To the religious right, Alito’s position on marital dominion was a virtue, not a vice, and they quickly mobilized to get him confirmed.

Nothing illustrated their commitment to Alito quite like the national telecast held on the eve of his confirmation hearing in January 2006. It was the third installment of a series called “Justice Sunday” intended to boost support for President Bush’s judicial nominees. Broadcast on Christian radio and television and beamed into churches all across America, this pro-Alito production had the potential to reach over 80 million households. The speakers were a who’s who of the religious right: televangelists, politicians, fundamentalist pastors, avowed Christian nationalists, conservative legal movement tacticians and right-wing gadflies.

To muster support for Alito’s nomination, Justice Sunday orators flirted with calls for the United States to become a theocracy and posited that Christianity should occupy a place of primacy in American life. Don Feder, the president of an organization called “Jews Against anti-Christian Defamation,” told Justice Sunday viewers point blank that America’s Constitution was made for government by Christians.

Rev. Jerry Falwell claimed in his address that there had been a “terrible move toward secularization in our county” that Alito could help staunch. “Let’s confirm this man, Judge Alito, to the U.S. Supreme Court, and let’s make one more step toward bringing America back to one nation under God,” he said. Name checking Justices Antonin Scalia and Clarence Thomas, Falwell proclaimed that Alito would be part of a Godly “reconstruction of a court system gone awry.”

After the Senate confirmed his nomination, Alito wrote an unusual thank you note to James Dobson, a key figure in the Christian right who spoke at Justice Sunday. “This is just a short note to express my heartfelt thanks to you and the entire staff at Focus on the Family for your help and support during the past few, challenging months,” the freshly-seated justice wrote. “As long as I serve on the Supreme Court, I will keep in mind the trust that has been placed in me.”

He has stayed true to that promise. The Justice Sunday speakers stewed in grievance and victimhood, conflating the loss of Christian cultural power with oppression. This thinking infused Alito’s recent speech in Rome. Echoing Santorum, he condemned the “growing hostility to religion, or at least the traditional religious beliefs that are contrary to the new moral code that is ascendant in some sectors.” And he suggested Christianity should be treated with special concern and regard in Western society, recounting his horror over seeing a young boy at a Berlin museum who couldn’t identify Christian iconography.

This thinking also permeates Alito’s jurisprudence. In 2015, for example, he argued in dissent that the Supreme Court’s decision-making same-sex marriage a right would be used to “vilify Americans who are unwilling to assent to the new orthodoxy.” Equal constitutional rights would be “exploited by those who are determined to stamp out every vestige of dissent” and cause the “marginalization of the many Americans who have traditional ideas” about the subjugation of LGBTQ people.

He has almost reflexively voted to erode the separation of church and state, undermine LGBTQ rights and dole out new privileges for Christians to free them from complying with secular laws. Perhaps most consequentially, he penned the theologically-inspired opinion overturning Roe that has led scores of states to ban abortion on religious grounds.

Justice Alito refracts his jurisprudence through the stained glass of the Christian right and its resentments, and he relishes being a combatant in the culture war. His Rome speech shows that he’s not stopping anytime soon.